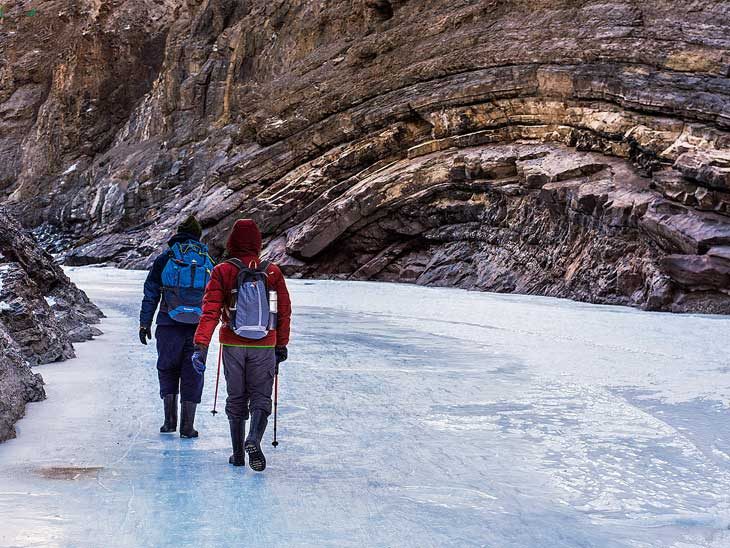 Chadar trek needs no introduction. It is not only a popular winter trek but also the most famous one in the Ladakh region. And why shouldn’t it be? After all, you get to witness one of the most magnificent views of all-time. It is like taking a walk in the ‘Winterfell’ city of the popular TV series ‘Game of Thrones’.

If you’re not familiar with the history of Chadar trek, it dates back to 1,000 years old. According to passed down history, the frozen river used to be the only feasible route to commute between Zanskar and Ladakh. People of Zanskar region would wait for the river to freeze, and would embark on the 100 km long foot journey to reach to the Ladakh region and barter goat skin, yak butter, wool and other items for their food and other necessities. 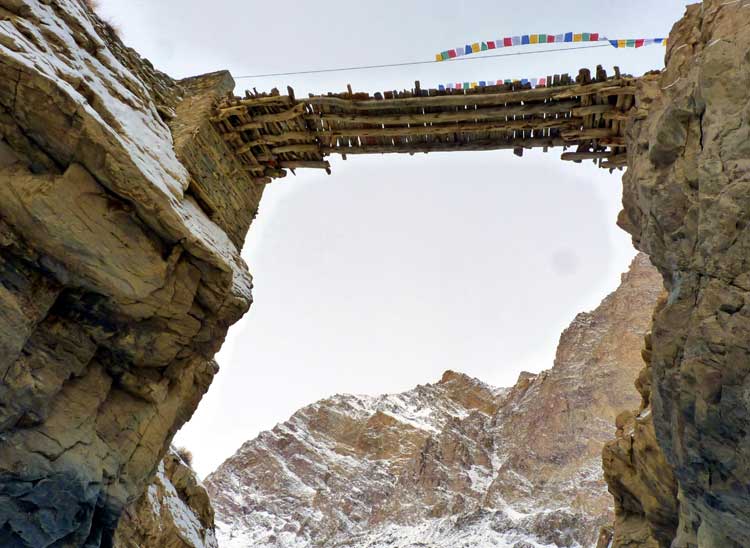 All this talk about history aside, even at the present day, the frozen Zanskar river is the only means of commute between the two regions during the winter season. Pensi La mountain pass connects Zanskar valley with the Suru Valley, but this road closes in winter due to heavy snowfall, leaving no other option but to traverse on the frozen river.


So, the route has the history, it offers the experience of walking over frozen river, it has amazing views of frozen waterfalls… Enough to motivate you to take up this trek, right? I bet it must be, but what if we add one more to the list. Apart from all the listings, the trek offers the gateway to witness the Zanskari culture as well.

The frozen Zanskar River connects the villages of Zanskar valley with those of Ladakh. Since it is a popular trade route between the two, the trail is treaded by the people belonging to both the communities and with that, you get to witness the hospitality and culture of the both Ladakh and Zanskar tribe, on the Chadar trek. No kidding.

You can spot Zanskari people in their bright red woollen robes known as ‘Goucha’, dragging the sledges, full of things that they carry to sell in Ladakh and in return will purchase the other necessary items that are not found in the remote villages of Zanskar valley. 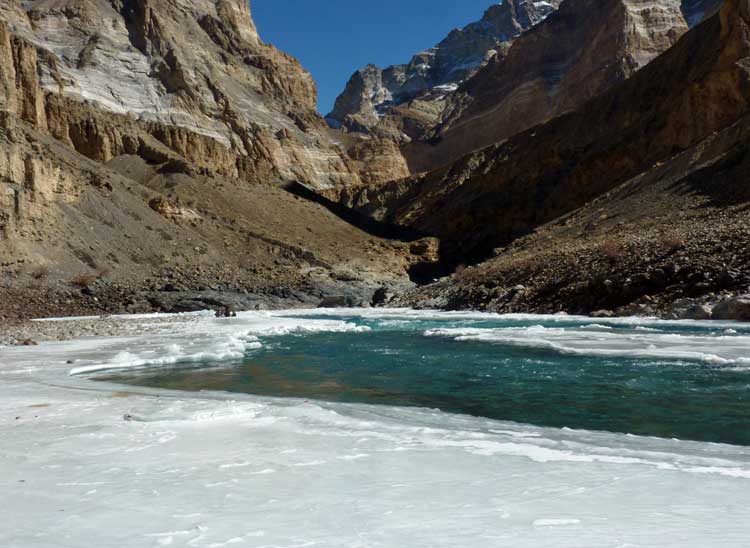 The Zanskari people speak Zanskari language which closely resembles the Ladakhi Language. It is written in Tibetan script and is among the list of endangered Tibetan languages. The villages of Zanskar have a combination of Tibetan and Buddhist influence. While the people of Ladakh practice Buddhism, Zankar culture is more influenced by the practice of Tibetan Buddhism, also known as ‘Lamaism.’ Buddhism is said to be made up of three levels of practices named as Hinayana, Mahayana and Vajrayana, whereas the Tibetan Buddhism revolves pretty much around the practice of Vajrayana only. The end goal of both the religions however is same, to attain ‘moksha,’ or to overcome the ‘samsaric’ activities i.e. to break free from the circle of rebirth and suffering.

The Zanskar River or the Chadar, famously known as ‘Khado Sanglam’ in the local Zanskari language, holds religious values for the Zanskari tribe. For them, the river is sacred. They perform pooja, ’a religious act,’ before stepping on the frozen river and take extra precaution while walking over the Chadar. You will spot them praying to God, to forgive them for taking their shoes on to the Chadar, they will pray for good weather. 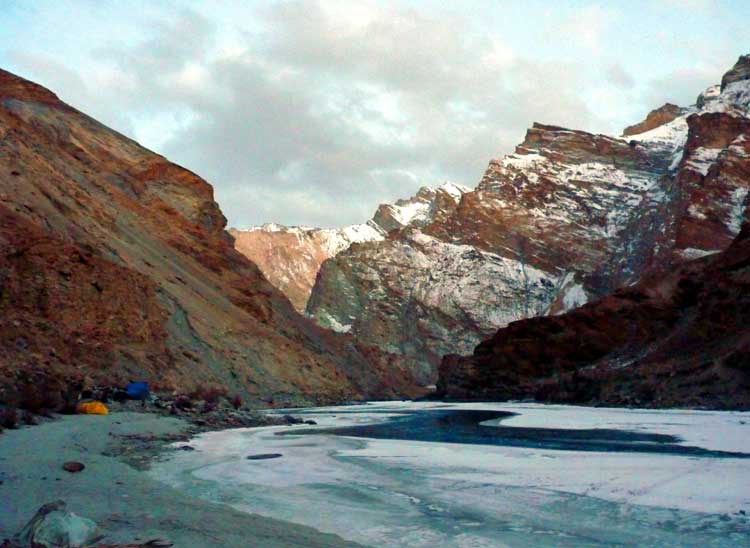 Due to the increase in number of people that do the Chadar trek, Zanskari people are scared that this will have a bad impact on them. According to them, people are exploiting the region and are creating a mess. In their eyes, they are making the river impure, which makes the God of the valley very angry, and that’s the reason behind the continuous decline of freezing of river. Zanskari people believe that the breaking of ice and trekkers falling into water is God’s way of punishing humans. They also believe that spirits are watching over the region, and due to the continuous increase in litter and the treading feet, these spirits will go away and will take away the freeze with them. That’s one of the biggest fears of these people. The landslides and ice-breaking are the ways of Spirits carry out punishments.

Despite all their fears and beliefs, they will greet you with the warmest ‘juley’ you will ever hear. They are always ready to have a conversation and share their experiences with the trekkers, and these are the most helpful and experienced bunch of people on this trek. Stumbling upon Zanskari people is inevitable since they too use the same trail for commuting between Chilling and Zanskar. So when you do the Chadar trek and spot the Zanskari people, don’t hesitate to approach them. If lucky, you might get to taste the butter tea with them or the local cuisine, and of course, hear the local tales of their tribe. Share your stories with them, and you will see what an amazing outlook these people carry in their eyes.

One thought on “A Cultural Tour to Chadar Trek”