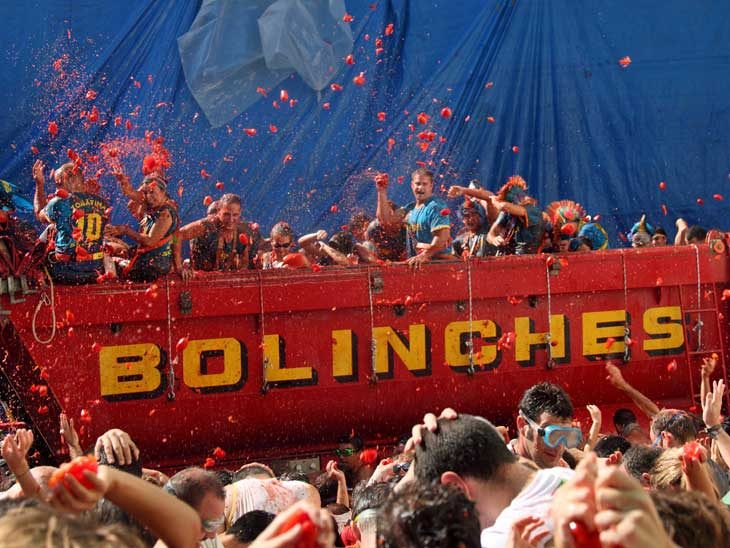 Festival, be it of any community, country, or reason, has a contagious vibe to it, which spreads like a wildfire around for the partakers. If you too are fond of all the pomp and show, eccentricities in context of customs, traditions, and bizarre practices followed during the festivities, then you must know about some of the world’s most amazing festivals. If you think you have ticked off the best of the world in your bucket list, then buddy, we suggest you to take a look at this section and then decide. The best, perhaps, is yet to come.

The aura of these festivals is so magnetic, that even if one can’t find cheap air tickets, they somehow manage to fly to the destinations they are taking place at, so as to not miss the fun at any cost. Well, we so don’t doubt them. See for yourself to know what makes these festivals steal the limelight on the global platform.

It’s a two-day celebration praising the get-together of relatives with their dear ones who passed away. At this festival, you can expect to see beautiful ensembles, heaps of culinary delights and drinks, skeletons on stilts, parties in cemeteries, skull-molded lollies and mariachi groups performing alongside graves. The Day of the Dead smashes the taboos encompassing demise, praising the continuation of life past and the estimation of interdimensional relationship.

It’s a celebration that witnesses a large number of sky lanterns light over the Pingxi District in Taiwan. It was initially celebrated to ward off evils and maladies from the town. The Taipei Pingxi Sky Lanterns were released initially to tell others that the town was protected. These lamps are scribbled with wishes and pictures identifying with the owner before being released into the sky, giving the entire skyline a mystical spectacle to behold.

As insane as it might appear, this celebration is held each year only for entertainment purposes, which means it isn’t fixing to any old conventions. In 1945, a couple of local people started throwing fruits and vegetables on one another during a parade, and since then, the tomato-tossing celebration has been celebrated with full zeal and vigour in Bunol, Spain.

According to the founder of this festival, the Burning Man is a City of Art where there are no spectators, and everyone has to contribute something in the form of art according to that year’s theme. It is forbidden to sell stuff at this festival, so you can see a lot of art bartering going on between strangers there, which gives this festival a special feel. This whole setup is followed by thousands of onlookers witnessing the burning of a giant wooden effigy in the shape of a man.

Do you like watching people make fools out of themselves? Well, if you do, then head to participate or be a spectator at the gut wrenching, adrenaline pumping Bull Running festival in Spain. Imagine a pack of wild bulls, charging crazily towards your derriere, and all you have to do is, save your life- if this sounds interesting to you, then be there in Pamplona, Spain from July 6-14 every year. And yes, may God be with you!

These are some of the most popular, bizarre, engaging festivities that are celebrated around the world. If these excite you enough, then imagine how amazing would it feel to experience all these up close? Go ahead!

Anjali Gupta is a travel blogger with three years of experience. She also writes for travel websites as a guest author and recommends best travel tips and destinations. Since travelling is what keeps her spirits high, apart from getting smart hacks for cheap air tickets, you can rely on her for any travel related trivia, anytime, anywhere. Interesting, isn’t it?