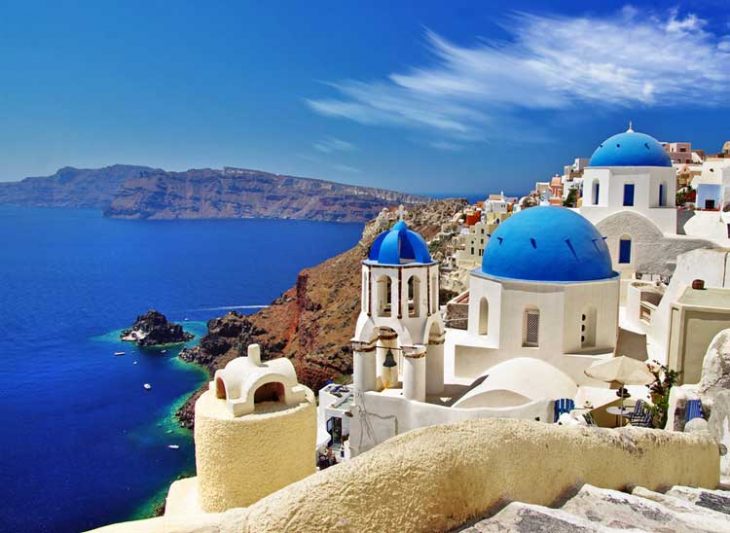 While the Greek islands are full of wonders, when people think of vacationing in Greece, two main destinations usually pop up: Mykonos and Santorini. And unless you’ve done your homework or stayed at any of these two destinations, it’s easy to lump them up together. However, both destinations have their own character, pace of life, and atmospheres. They also tend to attract different crowds. Here is a comparison of both islands, so you can make the best decision based on your lifestyle, needs, and expectations.

If you’re looking for the place with the most beautiful beaches, we’re going to say it right now, Mykonos is a clear winner. Santorini is more of a volcanic island, so don’t expect to get kilometres upon kilometres of pristine white sand beaches. While places like the Red Beach with its beautiful volcanic sands, or the black sands of Perissa might make for a unique experience, Mykonos is definitely where it’s at as far as golden beaches go.

Again, when it comes to shopping, Mykonos emerges on top again. Mykonos is a pretty jet-set city and attracts celebrities from around the world, so this is only to be expected. Whether you’re looking for a Gucci, Louis Vuitton, or any other store from major designers, you’ll find it in Mykonos.

That doesn’t mean that Santorini has nothing to offer when it comes to shopping though. However, the experience there is much more low key. You’ll also get the chance to buy items from local designers and artisans.

In this case, both options are winners. Both regions are known for their top of the line villas and prime locations. The best bet would be to go with a company that operates villas in Mykonos and Santorini as well, such as BlueVillas, for instance. They operate a wide variety of villas in both areas and other places in Greece and have a solid reputation for great service and even greater locations. So, you should definitely consider looking at some of their properties and speak with one of their agents to see what they have to offer.

This is the first point in favour of Santorini. When it comes to the beautiful sunsets and scenery, it’s hard to beat Santorini. You’ll be blown away by the tiny island’s natural beauty and cliff-top villages. Mykonos, however, also has great architecture and colourful neighborhoods like Little Venice which are great as well. Though we’ll have to give a slight edge to Santorini on that one.

There’s nothing like summer in Mykonos, and if you’re here for the action, then this is definitely the busiest during the high season. But it also gets very quiet during the wintertime. Santorini, on the other hand, is much more even-keeled, though it still gets a little quieter during the off-season. Though never as much as Mykonos. So, if you’re looking for the best off-season destination, the point goes to Santorini.

As far as the weather goes, there isn’t really a noticeable difference between the two. Both places offer great weather, and the best time to visit is between May and October. However, since people go to Santorini more for the scenery and sightseeing activities, it’s much more interesting out of these months. People in large part go to Mykonos for the beaches, which is why it gets this quiet during the low season.

It’s really hard to declare a clear winner here. On one hand, Santorini has historical attractions such as Akrotiri, which is a Greek version of Pompei dating as far back as the four Millennium BC and was destroyed by volcanic activity. Thira is also a great city for the history buffs out there.

But while Mykonos is largely known as a party destination, it has many great places to visit as well like its Archaeological Museum and the Rarity Gallery. However, one thing Mykonos does have going for it is that it’s right next to the island of Delos, which is an archaeological wonder all by itself. So, if you want to visit an open field museum, you’ll be just a boat ride away.

Well, in this case, Mykonos is the clear winner. Mykonos is known the world over for its vibrant nightlife and cosmopolitan atmosphere. You’ll get the chance to see people from all over the world, even some familiar faces. If you want to have a blast and the time of your life, then Mykonos wins hands down.

So, what’s the best choice? It all depends on you. Make sure that you look at the points in favour of both cities and see which one would be more your speed. And don’t be afraid to ask the people around you for recommendations as well.