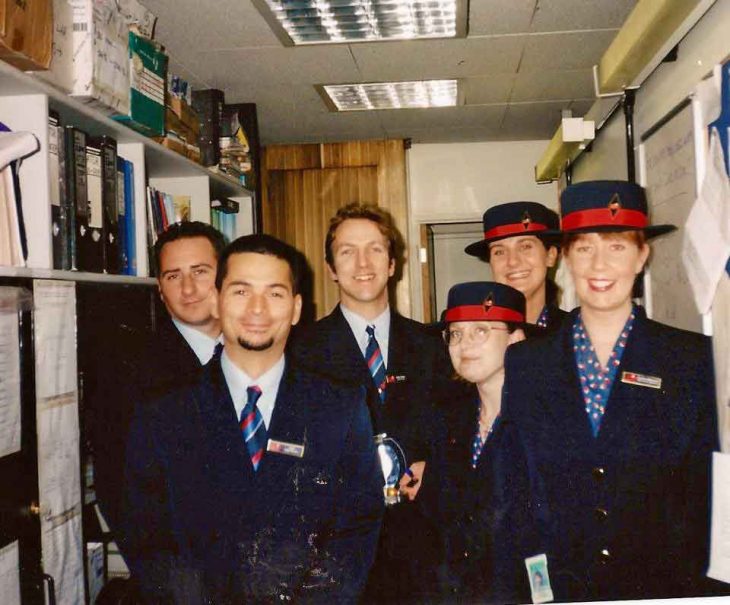 The nature of the job was this: People rang British Midland and booked a seat. If there wasn’t enough time to send the tickets by post they could be issued at the airport. That was our job. You’d take a passenger’s booking reference, ID, or credit card, and issue their ticket. A single transaction could take less than a minute. If passengers were flying with hand luggage you could check them in too. You sold tickets, made future reservations, rebooked people who missed flights, OK’d people for standby if their ticket wasn’t flexible, as well as rerouting passengers who’d missed connections due to operational reasons. You also processed overbookings.

The tasks were neither far ranging or difficult. You didn’t have to be Einstein to get a job as a Midland ticket agent.

At the age of 19, and having worked for eight months with Ryanair at Stansted, I secured a job with British Midland (‘a real airline’, to paraphrase one former colleague) in its reservations office in East Midlands. Once you were versed in the job of res agent and had some knowledge of fares, you could apply for ticketing vacancies at airports on Midland’s network. This was the route I took.

I didn’t need to drive. There was not much point anyway. I lived quite close to Hounslow West tube station which was a few stops from Heathrow. On a typical day I got up at 4.00AM, was on the train by half past and at work by five to five. In the office behind the ticket desk a supervisor would complete a roll call, the desk lights would come on, and we’d spring into action.


The Main Desk was about fifteen metres long with positions for ten staff; that’s not to say a full complement of staff was by any means the norm. Where Check-In was comprised of three islands of boxed-off booths, the ticket desk was like a counter in a bank, apart from the absence of reinforced glass between you and the public. Add to this the fact that you were open from five in the morning til nine-thirty at night and it wasn’t like a bank at all. Often a queue would form before the desk opened, and still be in full swing when you were trying to close up.

Occasionally a uniform inspection was conducted. A supervisor would check that name badges were on show, top buttons fastened, men were clean shaven, women had their hair tied neatly. The males had to wear fastened jackets, females their hats, any time they left the desk. The staff hand book also demanded an optimised sense of ‘everyone or no one’ uniformity on the desk; nobody was permitted to remove their jacket unless the entire desk followed suit, and vice versa. Even the most pedantic supervisor, thankfully, didn’t enforce this rule.

The Main Desk was busiest. With over 100 daily flights, and being on the Terminal 1 departure floor, it was arguably one of the busiest desks at London Heathrow. Though BA had a greater quantity of flights, and much larger aircraft, they flew from three terminals and had much larger man power.

The ‘Info’ desk was a dedicated ticketing point for Midland’s executive club members and was situated next to domestic departure security. It was also just round the corner from domestic arrivals, and so you frequently got people coming to you for flight information. It didn’t matter that the person they were waiting for was flying BA or Aer Lingus, or that you were a ticket desk for privileged fliers. The mere fact that you were an airport desk meant you provided ‘info’, and it was often a waste of time arguing.

The ‘Gate’ desk was situated in a large domestic lounge, airside, employed by Midland as a sort of corral for the mass of its departing internal passengers.

‘Transfers’ was airside on the International side, and yet situated a comfortable distance away from the bustle. The passengers you met here were usually transferring from other airlines onto Midland and collecting boarding passes, their bags through-checked. The ticket point we occupied here was a back office job with a check-in desk out the front. If connecting passengers had a ticketing enquiry, which was rare, check-in would give you a shout.

Staff Travel was a ticket office where Midland staff came to buy the discounted tickets they were entitled to as airline staff.

So to summarise: The Main Desk was an unending onslaught of passengers. Info wasn’t bad comparatively, even withstanding the headless sheep. The Gate was quieter again and ideal for reading, or a bit of plane spotting. Transfers was ideal for making personal phone calls or nursing hangovers. Staff Travel was a break from the norm, the office being down in the bowels of the airport away from the madding crowd. There was no pressure there. You could take your time without the threat of someone missing their flight.

Some staff preferred the Main Desk. The time flew when you were busy I guess. Others felt cut off, because you worked as a pair on Info, or alone in the case of the others.

In the beginning, when you were rostered Main Desk you’d sit at position 9 or 10, as these were least busy, but supervisors soon twigged, and began to assign seats. The one place you didn’t want to be assigned was desk number 1, aka: Pole Position, where the queue began. You were inundated with punters even when it wasn’t busy. Just a trickle of activity was enough to ensure your day was doomed from the start. At Pole Position, for you to attend ten people in succession while your companions sat idle was not uncommon.

I never minded how slow a day went. I was just keen to get off that Main Desk.

Editors note: BMI is integrated in British Airways since 2012 and all their aircraft are now flying with BA livery. Wikipedia has extensive article about BMI which is an interesting read. You might also be interested in the introduction of Patrick Gallagher or his posts about Travel and Airline Industry.